Following their campaign to Petition the California Board of Psychology Licensure to properly investigate the death of 8-year-old Jude Mirra — and the murder’s possible connection to pseudoscientific therapeutic practices — Grey Faction (a sub-group of The Satanic Temple [TST]) hosted a protest on April 2nd, 2016 outside of the Parc 55 Hotel in San Francisco, California where the International Society for the Study of Trauma and Dissociation (ISSTD) annual conference was held. The ISSTD, a “professional organization” for Mental Health professionals who still subscribe to discredited theories related to “Multiple Personality Disorder” (now known as Dissociative Identity Disorders) and “repressed trauma”, “continues to attempt to put a scientific veneer on the long debunked theories of ‘recovered memories’ that gave rise to the anti-Satanic moral panic of the 1980s, and hypnotic therapeutic techniques that are used to derive past-life regression narratives, as well as Alien Abduction ‘memories.’ This is, in no way, science,” Lucien Greaves, TST spokesperson and co-founder states. The Grey Faction is attempting to draw attention to the practices endorsed by the ISSTD, the conspiracism rampant within their membership, and the organization’s possible role in the death of Jude Mirra. 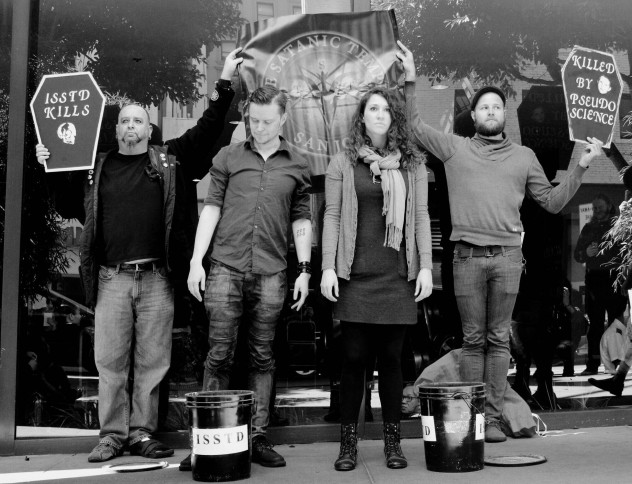 Five performers symbolically demonstrated the dysfunctional, harmful relationship between ISSTD therapists and their patients. The mission of this event was to expose the ISSTD organization as instigators of pseudo-scientific practices that have been directly connected to the harm of their patients and the murder of Jude Mirra.

Two women were restricted to movement with chains while 5 gallon buckets full of grey ash poured over their kneeling bodies. A man read from the Diagnostic Statistical Manual- 5 about Dissociative Identity Disorder as if praying over the patients with the doctrine of pseudoscience while two individuals stood holding signs that said, “ISSTD Kills” and “Killed by Pseudoscience” with Jude Mirra’s portrait.  Sarah Ponto Rivera (Grey Faction Director) explains:

The chains symbolizes the mental health consumers constraints from manipulation by their ISSTD psychiatrists. The patients are held in a metaphorical  bondage in order to ‘get better’. The buckets labeled ‘ISSTD’ signifies the weight of pseudoscience within the ISSTD organization. The Grey Ash is representative of obscuring truths with a cloud of delusions and imposing a false reality that causes harm to mental health care consumers. The trail of ash off the women’s bodies touching pedestrians on the street  symbolizes the communities impacted by therapeutic pseudoscience.

Upon completing the performance, Lucien Greaves (TST spokesperson and co-founder) entered the ISSTD conference to ask questions related to their perpetuation of debunked therapies and their purveyance of Conspiracy Theory by way of the ISSTD’s “Ritual Abuse/Mind-Control Special Interest Group.” Greaves was promptly ejected from the premises. Grey Faction Video