A Response to The Christian Journal 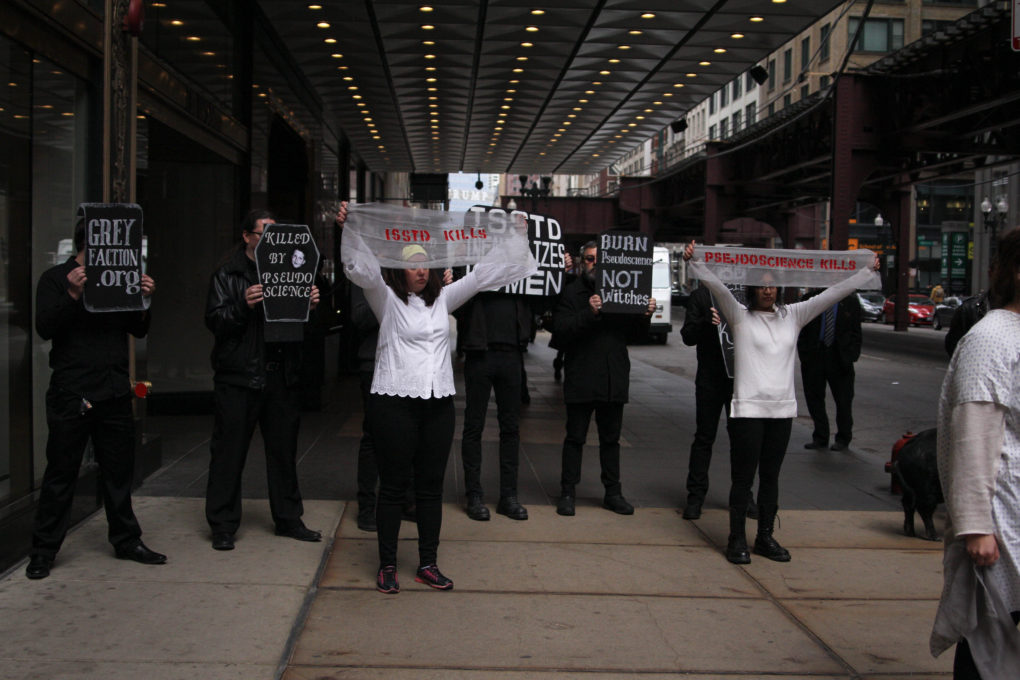 An article recently published by The Christian Journal on our protest of the 35th annual conference of the International Society for the Study of Trauma and Dissociation (ISSTD) demonstrates the importance of due diligence when reporting the beliefs and views of your subjects.

Right from the first sentence, it’s quite clear that the writer intends to take the ISSTD at their word while dismissing the merits of protesting such a conference: “The [ISSTD] just finished their 35th annual conference last weekend in Chicago, in which they discussed “where thought leaders in treatment, research, and training are headed” and apparently the Satanic Temple found the conference a [sic] to be a threat.”

To explain the impetus for our protest, the writer appropriately quotes from our statements regarding the ISSTD’s facade of reverence for the scientific method while preaching conspiratorial delusions of Satanic ritual abuse behind closed doors. However, the following quote was inexplicably added, devoid of context: “The Grey Faction blames Ellen Lacter, a psychologist affiliated with the ISSTD and S.M.A.R.T. [Stop Mind Control and Ritual Abuse Today].” Someone who is not familiar with Grey Faction — that is, pretty much anyone reading The Christian Journal — would be under the impression that we blame Ellen Lacter for our feeling the need to protest.

We have been concerned with Ellen Lacter because we believe she contributed to the death of Jude Mirra. Jude was murdered by his severely mentally ill mother, a client of Lacter’s, who came to believe that his symptoms of autism were actually a result of Satanic ritual abuse. The writer would have learned if she watched this four minute video we produced last year:

Instead of bringing up these specific concerns we have about Lacter, the writer of this article attempts to dismiss our unmentioned gripe with her by quoting from her website, on which, predictably enough, Lacter describes herself as a heroine dedicated to supporting victims of “ritual abuse and mind control whom I have treated in therapy or befriended as an advocate.”

Further sowing confusion over — and at the same time dismissing — the purpose of our protest, the writer states that “[t]he ISSTD has a Ritual-Abuse Mind-Control Organized Abuse Special Interest Group that Ellen Lacter is a part of, but she didn’t speak at the conference last weekend,” implying that we believed Lacter would be there, and wouldn’t have protested if we knew she wasn’t in attendance. In reality, there are many individuals like Lacter at the ISSTD, and we believe every last one of them should lose their license to practice.

The article then links to the schedule of presentations at the conference, snidely dismissing our opposition to the conference because the titles of the presentations seem innocuous enough. Nevermind that the sentence prior mentioned the existence of a “Ritual-Abuse Mind-Control Organized Abuse Special Interest Group,” which alone ought to raise a red flag in the mind of any reasonable person. And nevermind that we already stated that the ISSTD shrouds itself in a veneer of scientific credibility, contradicted by firsthand evidence our infiltrators have uncovered over the years. The ISSTD is to be taken at their word by this reporter.

It appears that all of this obfuscation is meant to set up the final sentence: “By protesting events like the ISSTD’s conference, the Temple of Satan is doing nothing less than drawing attention to the event that could help facilitate healing in the future and raising suspicions as to why they are so concerned.”

Conferences such as the ISSTD should “help facilitate healing,” but we have good reason to believe that they do not. Instead, it seems that those affiliated with the ISSTD actually create trauma; former clients and patients have reported that the false memories of Satanic ritual abuse and other bizarre claims implanted by these practitioners in the course of therapy have had that effect. Often, these false memories of horrific abuse cause irreparable harm to families, even after accusations are recanted.

The writer’s “suspicions” of our concerns about the ISSTD could have been resolved by ten minutes of Googling, research that likely would have also prevented her from comically referring to us as “the Temple of Satan.”

The reason we protest the ISSTD is because the organization at its core supports pseudoscience and paranoid fantasies that ultimately traumatize and harm the patients these mental health practitioners are supposed to be helping.

We protest because we are contacted by current and former patients, and family members of the same, who report horrific experiences at the hands of these practitioners.

We protest because affiliates of the ISSTD, including current president Kevin J. Connors, have made some truly bizarre and disturbing statements regarding Satanic ritual abuse, statements that must be wholly separated from conferences where attendees can earn continuing education hours to keep their licenses “up to date” on the latest developments in their field.

We protest because renowned speakers at the ISSTD have an extraordinary tendency to find themselves sued for unethical practices, or to otherwise have their licenses suspended or revoked — if they exist at all.

And we’ll continue to protest, year after year, until the pseudoscientific practices and harmful conspiracy theories espoused by the ISSTD are deemed no longer acceptable in the mental health field.