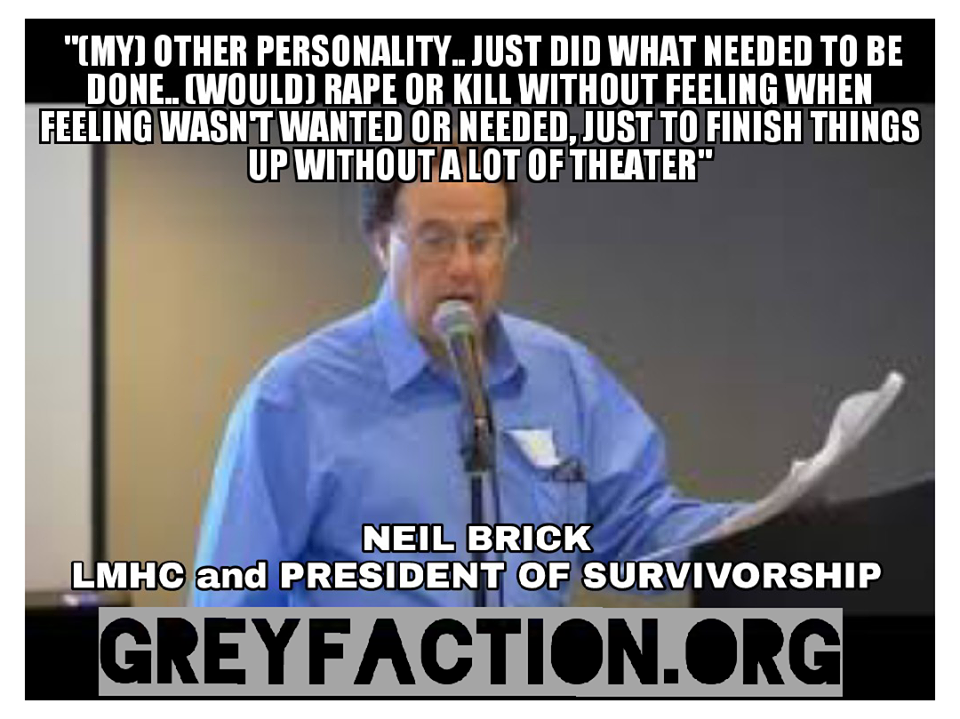 Again, this is but an introduction to the shockingly paranoid and delusional conspiracist narrative that Neil Brick propagates, and that his licensure serves to indicate a certain credibility and sanction derived from the Allied Board of Health Professionals. One has but to peruse Neil Brick’s multiple websites and publicly-posted writings and seminar transcripts to gain an understanding of his deeply suspicious, highly implausible worldview relating secretive cult conspiracies and government operations to issues directly relevant to Mental Health Care practice — specifically, the assumption that Dissociative Identity Disorder (DID) is directly installed by the nefarious mind-control ambitions of the aforementioned secretive groups into targeted victims.

These beliefs are not benign and the authors of this petition have recently implicated an associate of Neil Brick’s, one Ellen Lacter, in cultivating the conspiracist beliefs that caused a mother to kill her own 8-year old child in an effort to preserve him from future abuse at the hands of a non-existent Satanic cult.

(Please see this video of Neil Brick at a conference presentation insisting that attendees refrain from touching their faces, lest they “trigger” mind-control programming:

Massachusetts General Laws Section 169 (M.G.L. c. 112, §§ 169) states that the Board, subject to a majority vote of its members, is authorized to deny, revoke or suspend a license granted pursuant to this chapter on the following grounds:

(2) violation of ethical standards of such a nature as to render such individual unfit to practice as a mental health and human services professional.

According to Consumer Affairs and Business Regulations 262 CMR 8.00: Ethical Codes and Standards of Conduct, 8.01: Ethical Codes: The Board of Allied Mental Health and Human Services Professions adopts as its official guides the ethical codes and standards of conduct For licensed mental health counselors the American Counseling Association Code of Ethics and the American Mental Health Counselors Association Code of Ethics.

The ACA Code of Ethics states, in relevant part:

When counselors provide advice or comment by means of public lectures, demonstrations, radio or television programs, recordings, technology-based applications, printed articles, mailed material, or other media, they take reasonable precautions to ensure that

We, the undersigned, contend that Brick’s public lectures printed articles, etc., in no way represent “appropriate counseling literature” based upon a proper, scientific, and rationally sound assessment of available, empirical data, but rather a highly speculative, suspicious, and even delusional conspiracist narrative.

When providing services, counselors use techniques/procedures/modalities that are grounded in theory and/or have an empirical or scientific foundation.

While we are not privy to records that indicate methods of treatment employed in Neil Brick’s practice, his public comments, seminars, publications, etc., make it abundantly clear that Neil Brick lacks a solid rational foundation whereby he recognizes what constitutes evidentiary “proof”, scientific consensus, or even reasonable inference. Aside from propagating long-debunked interpretations of alleged Satanic Cult crime paranoia from the 80s and 90s, Brick also extensively relies on a retrospective survey known as the “Extreme Abuse Survey” (EAS). The EAS was designed to prove, among other things, that,

This survey, administered online, and circulated primarily amongst already-invested believers in mind-control conspiracies, is unscientific to the point of being worthless.

C.8. Responsibility to Other Professionals

In contradiction to this, Neil Brick holds conferences in which he espouses his conspiracy theories as accepted clinical truths. His conferences, held on behalf of “survivors, co-survivors, therapists, other helping professionals, lawyers and all others interested in learning more about ritual abuse,” in no reasonable interpretation of the Standard of Ethics could be said to constitute the expression of a “personal perspective” removed from any question of therapeutic conduct, especially given the emphasis upon Dissociative Disorders.

Neil Brick also holds “Clinician Conferences” in conjunction with his annual “Ritual Abuse/Mind-Control conferences. These Clinician Conferences are described on his website as “open to licensed practitioners in related fields to discuss issues in working with clients suffering from ritual abuse and extreme abuse symptoms. Students studying in related fields and retired licensed practitioners [are] also in attendance.” 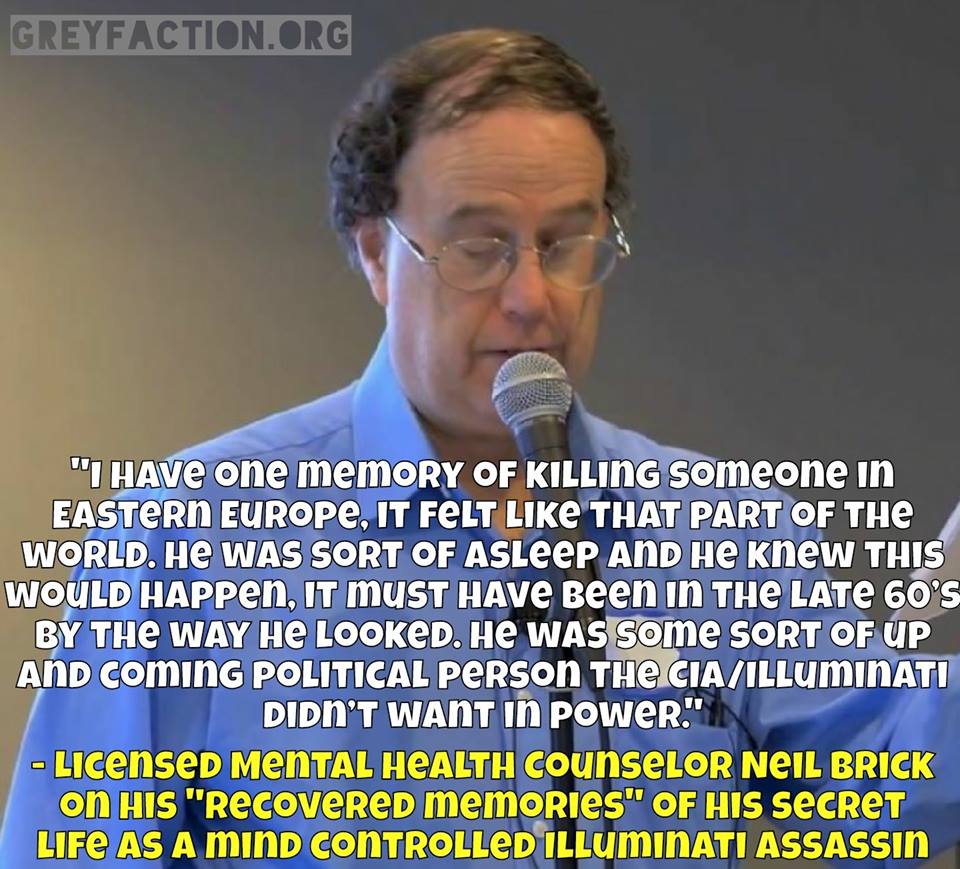