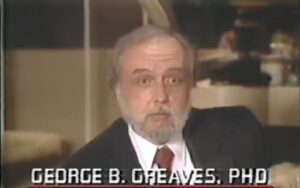 George B. Greaves was one of the founding members of the International Society for the Study of Multiple Personality & Dissociation (ISSMPD) which later became the International Society for the Study of Trauma and Dissociation (ISSTD). He closely worked with Richard P. Kluft by contributing and editing his articles and publications. In addition, he contributed and sponsored to the ISSTD journal named DISSOCIATION. Greaves was closely knitted to ISSTD but then dedicated his time and efforts to the Ridgeview Institute as Program Director.