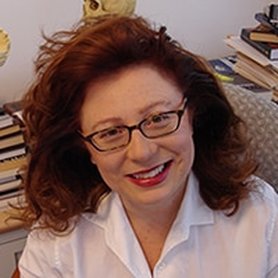 Perlmutter is a self-appointed expert in ritual and occult crimes. Her academic credentials are in art history. She has written on the parallels that exist between Satanism and terrorism in a piece entitled “Skandalon 2001: the Religious Practices of Modern Satanists and Terrorists.” Here is an excerpt from this embarrassing excuse for a piece of scholarship.

Perlmutter teaches a course on Ritualistic and Occult Crimes Investigation. The following is from a description of this course:

This updated course is a comprehensive workshop designed to provide crime scene analysts, law enforcement professionals, and other investigators with an extensive understanding of crime scenes containing symbolic and unfamiliar evidence. Investigators will be introduced to the types of crimes most often associated with occult activity, crime scene clues, investigation strategies, and an overview of active groups. Crime scenes, forensic and symbolic evidence involving the ritual practices of Satanism, Santeria, Voodoo, Palo Mayombe, and the Goth, Vampire, and Fetish Scenes will be presented.  New to the course is a block of instruction dealing with ritualistic practices of human traffickers.  Crime scene and autopsy images will demonstrate forensic and symbolic evidence specific to particular groups. Case studies include ritual sexual abuse, animal sacrifice, ritual homicides and human trafficking.

From We Asked an Expert on Ritual Murders About the Triple Homicide in the Florida Panhandle:

From The Sacrificial Aesthetic: Blood Rituals from Art to Murder