The Satanic Panic Is Fundamentally Misogynist 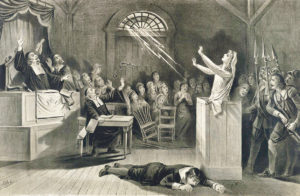 “Blaming therapy, social work and other caring professions for the confabulation of testimony of ‘satanic ritual abuse’ legitimated a programme of political and social action designed to contest the gains made by the women’s movement and the child protection movement. In efforts to characterise social workers and therapists as hysterical zealots, ‘satanic ritual abuse’ was, quite literally, ‘made fun of’: it became the subject of scorn and ridicule as interest groups sought to discredit testimony of sexual abuse as a whole.

“Intimations of collusion between feminists and Christians in the concoction of ‘satanic ritual abuse’ continue to mobilise ‘progressive’ as well as ‘conservative’ sympathies for men accused of serious sexual offences and against the needs of victimised women and children. This chapter argues that, underlying the invocation of often contradictory rationalising tropes (ranging from calls for more scientific ‘objectivity’ in sexual abuse investigations to emotional descriptions of ‘happy families’ rent asunder by false allegations) is a collective and largely unarticulated pleasure; the cathartic release of sentiments and views about children and women that had otherwise become shameful in the aftermath of second wave feminism. It seems that, behind the veneer of public concern about child sexual abuse, traditional views about the incredibility of women’s and children’s testimony persist. ‘Satanic ritual abuse’ has served as a lens through which these views have been rearticulated and reasserted at the very time that evidence of widespread and serious child sexual abuse has been consolidating.” (p. 60)

In case it’s not clear: the Satanic Panic “narrative” (read: universally understood reality) is really about misogyny and patriarchy. Salter would like his readers to believe that the real reason people doubt accounts of infant sacrifices, flying people, and cannibalism is not due to physical impossibility, total lack of evidence, and numerous retractions, but because we just aren’t ready to take women and children seriously.

Needless to say, it’s awfully convenient to ascribe bad faith to those with whom you disagree. If you’re suffering from a lack of legitimate arguments, just call them bigots.

But there’s a gaping hole in Salter’s argument: many, if not most, of the falsely accused are women.

If Salter is right -- that the Satanic Panic “narrative” is about disbelieving women and children, and promoting Satanic Panic hysteria (as he does) is, by inference, a feminist cause -- we would expect, at the very least, that the assigned sex of the accused in cases that have come to define the Satanic Panic era would not be statistically significantly more likey to be females relative to the FBI’s sex offender statistics.

In other words, no more than 8% of accused perpetrators (to take the greatest female-perpetrator figure from the above-cited FBI statistics) in Satanic Panic cases should be women. A feminist, anti-patriarchal cause that involves disproportionately imprisoning women makes little sense.

Yet a sample of alleged perpetrators in Satanic Panic cases shows that women are more likely than men to be accused. Women were defendants in more than half of the cases -- far greater than the expected 8%. (If interested in the statistics: χ²(N = 29) = 87.68, p < .001.)

We find similar results when we browse cases tagged “child sex abuse hysteria case” in the University of Michigan’s National Registry of Exonerations. Nearly half of the convicts -- later released -- were women. And when you search among all cases with the keyword “satan,” 21 out of the 56 defendants were female. This again is statistically significantly more women than we’d expect.

It should be no surprise whatsoever that witch-hunts unjustly target women: it’s literally in the phrase witch-hunt. What is rather surprising is that an “academic” like Salter would champion a witch-hunt as a feminist cause, and that people apparently buy it, particularly when it falls apart the moment it’s subjected to any measure of scrutiny.

In reality, the Satanic Panic is fundamentally misogynist. It involves not only harming women and children who, in the course of seeking mental health treatment, are implanted with traumatic false memories of abuse at the hands of non-existent cults, but also the further victimization of women who are disproportionately (and falsely) accused of perpetrating said abuse.