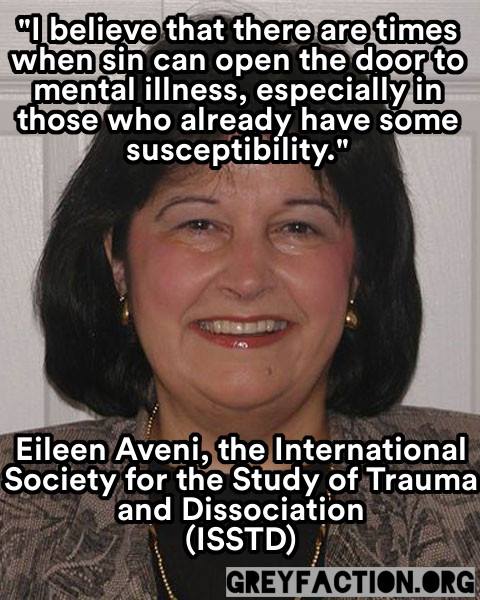 Eileen Aveni-Sappington (née Aveni) is a practicing LCSW and LMSW with ACSW and BCD certification. Aveni-Sappington is currently licensed by the Virginia Department of Health Professions and the Michigan Department of Licensing and Regulatory Affairs (on probation as of December 2019). Aveni-Sappington has served as a chairperson of the Ritual Abuse and Mind Control special interest group division of the International Society for the Study of Trauma and Dissociation (ISSTD) and is currently a board member of Survivorship and The Daniel Coalition.

In a bio provided for Aveni-Sappington’s ISSTD webinar on the Migration Model, she claims to have been working with victims of ritual abuse and mind control for 30 years and to have assisted in writing legislation for the state of Michigan. Aveni-Sappington also spent time in Kuala Lumpar, Malaysia, where she claimed many of the sex trafficking survivors she worked with showed “significant dissociative symptoms.”

Aveni-Sappington has been invited to speak at numerous conferences, most recently at the Survivorship Ritual Abuse and Mind Control 2019 Conference on the topic of “The Complexities of Identifying Ritual Abuse and Mind Control in Your Client.”  The slides for this presentation openly discuss elaborate and sophisticated mind-control programming by groups including multigenerational familial cults for such purposes as creating secret assassins.  In the spirit of the infamous Greenbaum speech, the slides also discuss sadistic mind control experiments carried out by the nazi-inspired programs like MKUltra and its descendent Monarch Programming, whose services she maintains are ultilized by such disprate groups as sex trafficers and miltary special ops.  Among the symptoms presented as indicators of ritual abuse and mind control presented here, one finds fear of snakes, spiders, and being under water, as well as headaches and advocacy for animal rights.

She also spoke at a 2018 Conference at Rachel’s Vineyard, a retreat for “healing after abortions.” During the conference she gave two presentations, one titled “What is Ritual Abuse? Why Do We Need to Know About It? Overview of a Structured Personality” and the other, listed as a special interest topic titled, “Ritual Abuse History and How It Was Integrated into the Church.”

Elieen Aveni-Sappington believes ritual abuse perpetrators create DID (Dissociative Identity Disorder) via mind control programming in order to keep the victim silent. According to Aveni-Sappington, ritual abuse perpetrators include: “monarch programming, generational satanism, witchcraft groups, and others.” Aveni-Sappington claims to use the "migration model" to deprogram mind control in her clients. This model is described by Alison Miller as migrating personalities from the “dark side” to the “light side” on which, she claims, God exists.

In a February 2018 complaint filed against Eileen Aveni-Sappington, a medical professional requested an investigation following the emergency room admission of one of Aveni-Sappington’s clients. The complainant requested the investigation on the grounds that Aveni-Sappington was continuing to remotely treat a client with an expired license and with concern that she was “feeding into” the client’s schizophrenic delusions.

Aveni-Sappington claimed that the client was not schizophrenic but rather was suffering from DID due to being trafficked as a child by her parents and was frequently under attack by her "handlers" with “electromagnetic energy weapons.” Aveni-Sappington also treated this client’s roommate, who provided a letter of support and Aveni-Sappington’s CV.

A complaint filed against Aveni-Sappington in March 2019 makes similar allegations. In particular, the complainant alleged that though Aveni-Sappington told her client she was "in life-threatening danger from her abusing group," not once did she contact law enforcement. Further, Aveni-Sappington claimed that her client was being subjected to "electronic stalking burns," something she claimed to have seen in another client.

Aveni-Sappington co-founded Crossroads Counseling Center, and was its clinical director for 14 years.  Crossroads is an interdenominational Christian counseling clinic in Ann Arbor, MI.  Christianity appears to be the lens through which she views a substantial portion of her professional life.   She has given several presentations with this theme, including a series for Prayer Ministries in 2016 on topics including Satanic Ritual Abuse, the description of which notes that “She regularly integrates faith-based principles into her practice and educates prayer ministries and other community groups.”

Aveni-Sappington delivered a presentation on the topic of Christianity and mental health treatment in 2014.  The slides for the presentation awkwardly alternate between an attempt at a measured approach and all-out supernaturalism.  In them, she maintains that “Jesus sometimes cast out demons to heal diseases but sometimes he healed the diseases themselves” and that “Mental illness, like schizophrenia, is the result of sin because our entire bodies have been ravaged as the result of generations and generations of sin.”  She also believes that literal demons play a role in mental illness and claims that “Sometimes our behavior opens up the door to demon oppression while, at other times, demons have used some other event in the sufferer’s life to gain a foothold.”

“I believe that there are times when sin can open the door to mental illness, especially in those who already have some susceptibility.”

“Sometimes our behavior opens up the door to demon oppression while, at other times, demons have used some other event in the sufferer’s life to gain a foothold.”

“Schizophrenia is entirely manageable and sometimes curable”  - [Note: According to the National Alliance on Mental Illness, Schizophrenia is still not curable, only treatable.]

“God may choose to heal them [patients with mental illness] miraculously, or he may provide a cure.”

“God very frequently gives a cure, but just doesn’t give the cure exactly how or when they want it.”

“Mental illness, like schizophrenia, or another medical problem is the result of sin. Generational sin or our sin.”

“Yes, demons can be at fault, too.  Sometimes, our behavior opens up the door to demonic oppression and other times demons have used other events in the sufferer’s life to gain a foothold.  But no Christian can be fully possessed by a demon because we are possessed by God.”

[On how to determine if someone is affected by demons] - “When people have had a lot of trauma in their lives, usually through no fault of their own, what tends to happen is the body and spirit of the person is weakened."

“Sometimes we just don’t know what caused the mental illness.  It could be demonic oppression, possession (rare) OR a medical problem, OR a traumatic event, OR a genetic problem.”

“Perpetrator groups have professional mind control experts who are hired, move around to different groups, are paid well to achieve flawless victims.”

“Does the person remember vacations?  … When were they taken?  Over known cult holidays? Close to a big cult holiday?”  [Note: According to the Survivorship list, most dates on the calendar are ritual or cult-related holidays.]

For more about Aveni-Sappington, be sure to read our two-part report about the ISSTD 2018 conference and Michael Salter pt II.