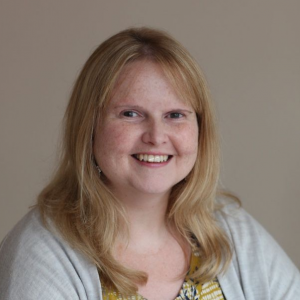 Has been a presenter with the ISSTD conference in past years and in 2014 presented on her encounters with patients who had allegedly been ritually abused by lizard aliens. Thomas’s point, it seemed, was that recovered memories of alien abduction were symbolic manifestations of some actual cult mind-control activity. Below are some quotes from her lecture, 'Going Back to the Mothership': Differentiating Concrete from Symbolic Meaning in the Psychotherapeutic Treatment of Clients with Mind-controlled Dissociative Identity Disorder," that Grey Faction attended in 2014: 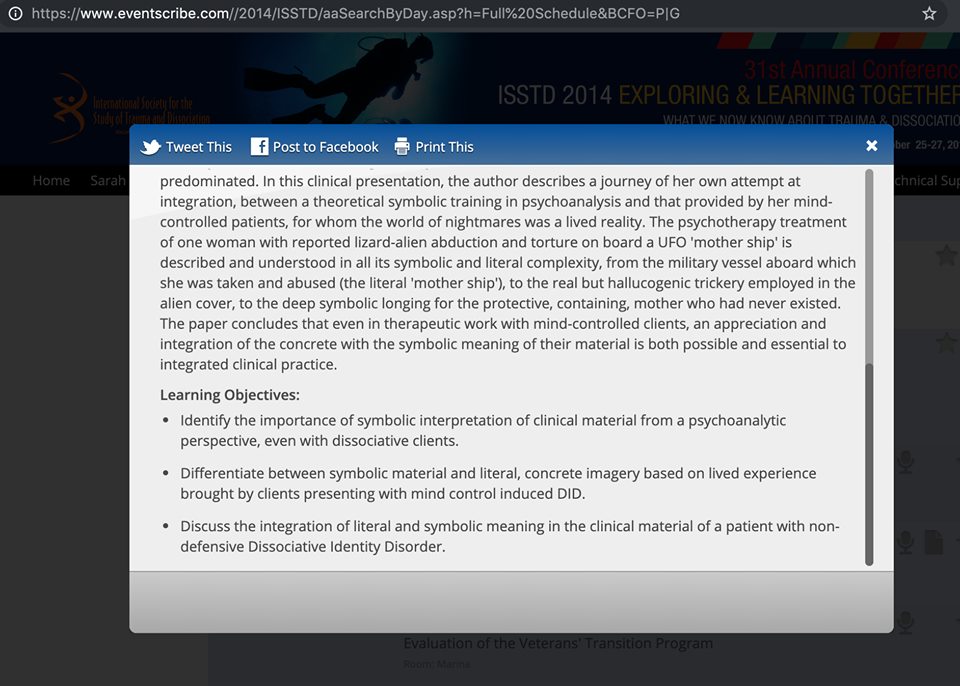 So I think that the deliberate creation of a dissociative mind is a perverse enactment of a symbolic equation. It’s in a way, and again thinking psychoanalytically, the kind of ultimate primitive process so that a child’s lived experience is of concrete life or death being on that knife edge at the total behest and in the total power of the abusive group of the torturing group and of course the link with the occult and with cult groups could be understood because cult ideologies give credence to this group of people who absolutely want to exert power and control in that way. It’s the idea of, you know, justifying corrupt and based power to any cost and people who’ve worked with survivors of ritualistic abuse will be familiar with the, you know, the way that some satanic ideas can be used, you know, do what thou will as the whole of the law. You know it’s easy to see I think when you can open your mind to it these sorts of ideas can be readily got hold of by groups who want to use them in a very particular perverse way.

[…]And Annie and some of her alter personality states have also disclosed brutal and ritualized abuse by many perpetrators within the group that her father took her to. The group had military and naval connections and it’s an interesting link within what we’ve just been thinking about in terms of the military. And the patient recalls being taken to a large military vessel at the docks on regular occasions and on this ship and she some of the alters are able to say that this was a ship in the dock and in into docks and to describe it. Um, other alters are fixed in a belief that on this ship there was a teleport to outer space and child personalities have been disclosed, have disclosed having been taken onto this ship, teleported into outer space where they were then tortured they said by alien lizards and shape shifters.

She believed that she was brought to earth by this UFO mothership and she has a tremendous, and I think, inducted hypnotically suggested programed, however you want to think about it, pull that she must always remain loyal to the mothership. It’s like a mantra that she recites particularly when there has been work with me and there’s a backlash in the system and a wish to pull back.  It seems that Star Trek, other science fiction was used repeatedly to reinforce these ideas. She has a lot of terminology from Star Trek and some of the other science fiction films. Which seemed to have been she had been made to watch repeatedly to kind of reinforce these belief systems. So, “I must go back to mothership” as this kind of programed mantra. And it always means suicide. It means “I’ve got to go to the river to go back to the mothership” which means she’s got to walk into the river and drown herself. “I’ve got to fly to the mothership” which always means I’ve got to go to the top of a high rise building or, and throw myself off. So there’s alway having to work with this very high level of suicidality with this patient.

I’ll very quickly just tell you the alter personalities, the AMP, Annie’s very compliant, polite, fearful, submissive- all of her aggression is projected really into the angry Ann personality. Or was at the start of treatment. That’s really beginning to shift because we’ve been doing a lot of work on that because Annie can’t bear any kind of conflict because for her it was never safe in childhood. She could never get angry. There was just no room for it at all.  She’s terrified of getting into trouble. Being locked in the cupboard and that’s a constant anxiety that she had. “Oh are you going to lock me in the cupboard if I do something wrong?”

All of the aggression, and these are just the alters we know about as yet I’m sure there are many more to come, but angry Ann is an adult personality we think she comes out very rarely and I’ve only met her fleetingly a few times. She believes herself to be demonic. She’s very identified it seeks with the abusive activity. She’s communicated to me mainly through drawings so far. And the drawing the patient herself, the AMP, is very creative and draws very elaborately. The angry Ann personality draws in a very stark way, very simple, very disturbing so coffins, and knives, and blood and you know the type of drawings that one finds with patients that have this