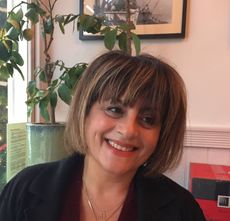 Orit Badouk Epstein is a UKCP registered Psychotherapist with a private practice in North West London. On her website, she goes on to say that she has a special interest in cases involving extreme abuse, trauma, and dissociation, and specializes in PTSD, DID, and psychosexual trauma. She states that she has been "treating survivors of sexual abuse, ritual abuse and mind control" for fifteen years.

Psychotherapists in the U.K. are not required to hold degrees, and Grey Faction has been able to determine what, if any, degrees she may hold. The only education information available was that she attended the Bowlby Centre in 2000. Epstein actively participates within The Bowlby Centre in many aspects. She is currently the Editor of their journal “Attachment – New Directions in Psychotherapy and Relational Psychoanalysis”, in which she has also published many articles. Orit holds the position of Training Supervisor, which is described by the Bowlby as someone who oversees third year students who are starting client work. The Bowlby Centre also requires students to undergo therapy for at least six years, starting a year before they enter the program. Orit holds a position as one of these Training Therapists at Bowlby, and speaks at seminars at Bowlby as well. She is also currently Chair of the planning group of the Bowlby Memorial conference.

Epstein also works with the European Society for Trauma and Dissociation (ESTD), which has close ties with the ISSTD. In ESTD’s mission statement, they aim “To promote an increase in the knowledge of Trauma, Dissociation and all disorders related to chronic traumatization”. She is the co-editor of their newsletter, has written articles for their newsletter, and speaks at their conferences.

Epstein is closely connected with other therapists with strong beliefs in ritual abuse, alien abductions, and mind control. In 2011 she co-edited Ritual Abuse and Mind Control: the Manipulation of Attachment Needs, which includes the chapters “What has changed in twenty years” by Valerie Sinason and “Torture-based mind control: psychological mechanisms and psychotherapeutic approaches to overcoming mind control” by Ellen Lacter. The book “Terror Within and Without: Attachment and Disintegration: Clinical Work on the Edge”, in which Epstein was co-editor, contains a contribution by Adah Sachs. These are just singular examples of her connections to others involved in the Dissociation community; when looked at in depth, it can be found that Orit is and has been continuously working with Sinason, Lacter, and others for quite some time.

Approaches to Psychic Trauma: Theory and Practice": Trauma Work Via the Lens of Attachment Therapy

For those of us who work with survivors of extreme abuse, the brutal chasm and dissociation that families who use mind control create is evident. A child may be brainwashed by a parent's presenting childish euphemisms for physical functions, unexplained religious beliefs, social practice, and taboos.

The client I am presenting in this chapter was born into a family of organized abuse. She experienced gaslighting by her mother for most of her life and has clear memories of her mother repeatedly telling her on a daily basis: "Darling, you were always quite dramatic," "you never had much stamina." "You do have a tendency to exaggerate things. You were such a happy baby; I don't know what you are talking about!" (349)

On our first meeting, she told me she had come across my book Ritual Abuse and Mind Control: Manipulation of Attachment Needs (Badouk Epstein, Schwartz, and Schwartz 2011), and suddenly it all made sense. Viscerally, K always felt that something terrible of the worst kind had happened to her, but when she confronted her mother by telling her, "I think I was sexually abused," her mother, in her customary dismissive and dissociative manner would say: "You always had a vivid imagination." On a conscious level, K remembered most of her life in a hazy and blurred manner. (349-350)

Before seeing me, K had spent ten years with a therapist, who told her that there was no evidence whatsoever to back her fantasies... When I asked K what kind of fantasies the previous therapy was referring to, she then started sucking her thumb and in a coy voice replied, "Sexual abuse, a lot of sexual abuse." (350, 352)

During the following four years, as we gradually created a secure base for K, without much prompting, K arrived regularly to sessions, lay on the sofa or on the floor mat, and tucked herself under a blanket holding a teddy and a hot water bottle. Then she would go in "trauma time," where slowly during each session more reports unfolded on a shocking scale about human atrocities visited on a young child. (353)

Since emotional abuse and distortions of one's reality has never received proper public recognition, the revival of the word and its modern interpretation is highly relevant to our work with clients who have been abuse, in particular, clients with a poor sense of agency and those who have survived horrendous mind control, torture, and group abuse. (361)

“One of my clients, who was born into a family of organised ritual abusers, has experienced gas-lighting by her mother for most of her life and has clear memories where her mother day after day, repeatedly told her: “Darling, you were always quite dramatic,” “you never had much stamina” and constant comments about having tonsillitis, constipation, too many antibiotics, glandular fever, and then when she collapsed at twenty-four with CFS (Chronic Fatigue Syndrome), her mother would visit her in hospital and assert that it was the Lariam (antimalarial tablets) that caused it. For this client, recognising the term “gaslighting” has not only helped her get closer to her EPS (dissociated emotional parts), but also enabled her to lift the veil of secrecy around her mother’s involvement in the abuse and develop a coherent narrative which is slowly helping her come to terms with the profound losses in her life.”

Ritual Abuse and Mind Control: The Manipulation of Attachment Needs

"From birth, Bruce was exposed to torture, abuse, and ritual rape by his parents and extended family, teachers, and a paedophile ring. He experienced child prostitution in England and abroad, as well as methods of severe abuse such as regular thumping on the head, being spun in a washing machine, being buried alive, confined in closed spaces covered with insects and snakes, made to eat faeces, terrorized by people in frightening masks and crocodile heads, forced to being electrocuted with a head device, hung off the top of the building, being put on the roof of a speeding car, being pushed out of an aeroplane, and even strapped to the wing of a flying plane. On coming to see me, Bruce displayed symptoms of severe phobias around heights, speed, reptiles, and insects, hair loss, washing in a bath, and much more. He also developed ME, severe headaches, and insomnia, all of which have now subsided in their extent." (p156)

"Unfortunately, survivors of ritual abuse are robbed of their needs from birth. Not one of Bruce's basic needs was adequately met. On top of the sexual and physical abuse Bruce regularly received from his mother, father, grandmother, grandfather, and the cult, he also endured endless humiliations, mockery, and bullying that left him feeling paranoid, shamed, and guilty, feeling that it was entirely his fault, which would often trigger voices saying: 'You'll go to hell, you pervert, dirty homosexual, good for nothing', especially around the satanic dates. Currently, Bruce and I are still fighting off these voices that seem to be an almost predictable backlash to the good progress Bruce is continuously making." (p158)

"Committed and determined to get better and never missing a session, Bruce spent most of the first nine months in therapy regressing into trance states, reliving and remembering his horrific abuse in detail. In doing so, he would often freeze, convulse, tremble, shake, and whisper, while his voice sounded younger. He would jolt, ache, itch, and scream as if he had been bitten by a snake, felt as if he was being buried alive, or was forced to eat human flesh. On leaving the session, he would then go back to his home and put all his memories into a journal; this helped him speed up the recovery process." (p158)

“Christmas is one of the hardest times for our survivors. It is time when human sacrifice takes place and when our clients were most terrorized and abused.” (p160)

"At this point he switched into little Bruce and started to cry. I had to extend the session. Sobbing, Bruce told me about his hellish Christmas, memories around the sacrifice of his little baby brother and how they threatened that they would kill his younger sibling if he did not slash the baby's throat." (p161)

"During the following months, we would recover more unbearable memories, flashbacks, and nightmares of ritual torture and abuse." (p161)

"Little Bruce's Hulk was born at night, around a solstice date in the satanic calendar, when a big party took place at a large mansion house in the country. Everyone was there - the whole paedophile ring and other familiar faces, all smartly dressed, some wearing masks. (p162)

“The consequence was inevitable: his punishment was due any minute; rape was not enough. They had to upgrade the level of mind control and torture. They had to make sure that the young boy who publicly humiliated them was silenced forever, and so, from the ages of nine to thirteen, my client was exposed to the most horrifying methods of abuse and terror, in which speed, heights, and suicidal mind control were the main tortures. He was nearly drowned, put into dangerous roller-coasters, hung off the top of buildings, placed in fast cars driven through dark tunnels, pushed out of an aeroplane tied to a parachute and permanently injuring his knee, and strapped to the wing of an aeroplane while it was in flight. The Hulk was regularly assaulted, bitten, caged, and imprisoned.” (pg 162)

“I tried to get in touch with her later by e-mail and by leaving phone messages, and while I was away I called her on Good Friday, which is the anniversary of the day D, at age thirteen, had to sacrifice her newborn baby son.” (pg 41)

“As well as being ritually abused from birth, D had been conditioned to severe mind control by a vicious perpetrator who used her as a guinea-pig for his sadistic laboratory experiments. On top of the many alters D had developed by the time she met him at the age of three, he then programmed her using extreme torture. He deliberately created and manipulated hundreds of parts inside her body that were in charge of detachment and suicidal ideation, making sure that D would never be able to attach, and neither should she stay alive.” (pg 42)