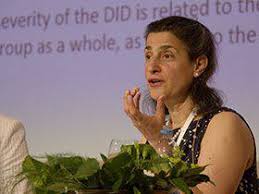 Adah Sachs has an extensive history in the mental health field, including writing publications, teaching, speaking at conferences and seminars, and holding positions within organizations. She has a special interest in intergenerational trauma, and has served as an expert to the court on Dissociative Identity Disorder (formerly Multiple Personality Disorder). Sachs has connections to many others who are listed on the Grey Faction website, whether it be speaking with them at conferences, publishing their work in her books, and otherwise promoting the industry that surrounds Satanic Ritual Abuse and Dissociative Identity Disorder.

Sachs has spoken at numerous conferences, many of which also had speakers that are also listed on Grey Faction’s Conspiracy Therapist list. For example, she gave a presentation titled "The DID RA family: an attachment perspective on a forensic relationship" at The Twelfth Annual Ritual Abuse, Secretive Organizations and Mind Control Conference in 2009 alongside other speakers such as Neil Brick. Lucien Greaves attended this conference, and he wrote a piece that describes what he experienced that you can find here. Sachs also spoke at a Four Day Continuing Professional Development Course with Valerie Sinason and Orit Badouk Epstein. In March of 2019 she presented with Michael Salter at ISSTD’s Annual Conference. She has also spoken at The Centre for Child Mental Health, and lead workshops at the Western Australia Family Law Pathways Network, which is an organization that works with separating or separated families.

It is also important to put a spotlight on the topics she is discussing at conferences and workshops. Sachs has many modules through Confer Center, such as “Regression: a necessary state of mind for therapeutic growth?” with, according to the website, a focus on “the regressive states experienced by people suffering from dissociative disorders. “Adah will reflect on the value of these states to protect the core personality of an abused childhood, but also discuss the severe risks to the adult in therapy who slips into these at times of stress.” and an online module titled “Forensic Psychotherapy: Pathologies and Treatment Strategies for working with Violence” in which Sachs’ module discusses the topic: “Dissociative Identity Disorder (DID) (American Psychiatric Association 2013) is examined in this presentation from the perspective of its relevance to the criminologist.” She also gave a 90 minute workshop with European Society for Trauma and Dissociation (ESTD) titled “Severe and unusual self-harm, DID, and two young people that I hadn’t helped” in which she explains how a child who is self-harming can actually be expressive of DID (information since removed from web site).

Western Law Family Pathways Network is an organization that provides services to families that are separated or are separating. Sachs has spoken at many conferences through them.

Her co-authored book, Forensic Aspects of Dissociative Identity Disorder, explores the link between trauma, DID, and crimes committed against those with DID, or committed or witnessed by them. Included are chapters such as “From Social Conditioning to Mind Control” and “When Murder Moves Inside” written by Valerie Sinason, and “Mind Control: simple to complex” written by Ellen P. Lacter.

Sachs also has ties with The Blue Knot foundation (formerly Adults Surviving Child Abuse ASCA), an organization that provides services and resources to adults who were traumatized as children. Sachs, along with others such as Joan A Turkus, gave her endorsement for ‘The Last Frontier’ PRACTICE GUIDELINES FOR TREATMENT OF COMPLEX TRAUMA AND TRAUMA INFORMED CARE AND SERVICE DELIVERY. These guidelines had two key changes: A formal diagnosis of Complex PTSD, which cites Bessel A. van der Kolk, and `Then and now’: The Royal Commission into Institutional Responses to Child Sexual Abuse.

"She appeared insightful regarding some school problems she had and was generally charming and warm, showing every sign of being a normal "troubled adolescent". That was rather at odds with the level of self-harm and with our knowledge of severe abuse in her history. Lily, I might add, had maintained that "nothing bad had ever happened to her".”

"On her second session, Lily came wearing her hair in pigtails and holding her teddy, which made her look about 6 or 7 years old. Still at the door, she asked me sweetly if I'd look after her teddy for her. I asked if she felt that he needed help, too, and she said that we were all making a mistake: he was the one "in danger"; she was fine. At that, she sat on the floor, carefully placing the teddy on the patient's chair. After a moment of silence, she said she was very worried about him; he would die if he wasn't watched. I asked what did she fear may happen to him. To my shock, her sweet little face suddenly became white and contorted, and in a monstrous, croaking voice that sounded to me like it came straight from The Exorcist, she roared, "I-I-I-I will kill him!

Now who is "I", and where does it live: in the teddy, which she had put on the patient's chair? In her harmed body? In the contorted faces of her abusers, who were suddenly visible on her own face? Or perhaps in that Lily she had told me about, the one whom "nothing bad ever happened to"?

For Lily was actually many "Lily's", who were largely unaware of each other."

Who Done It, Actually? Dissociative Identity Disorder for the Criminologist

“In therapy, people with DID (or their alters) describe growing up in the shadow of on‐going sadistic sexual, psychological and physical abuse, usually by multiple perpetrators (Chu 2011; Kluft 1999; Mollon 1996; Sachs 2008; Stain 2007). Most of them explain that abuse is inseparable from their everyday life, and is practiced and suffered by every member of their family, for generations (Middleton 2013b; Miller 2012; Sachs 2011). Others report organised sexual abuse, human trafficking and group ritual abuse (Healey 2008; Miller 2012; Salter 2013; Sinason 2011), years of incestual abuse (Middleton 2013a,2013b) and organised torture (Ross 2000). Many confess to abusing others (including family members) or to committing murders, and hold these recollections of perpetration as the most traumatic of all of their experiences (Sachs 2013a). Indeed, as recollections of inflicting abuse are so traumatic, they tend to be some of the most heavily dissociated, and require much therapeutic help before they can emerge.”