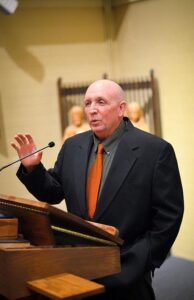 Joseph Charles Schriner began a writing career after graduating with a B.A. in Journalism in 1978. After working for a few local Ohio papers, he decided to change his career to alcohol and substance abuse counseling. According to Schriner he also worked with clients suffering difficulties with codependency and trauma. He began working for the Lorain County Council on Alcoholism and Drug Abuse in their 90 day inpatient program. He later completed “certification seminars” and continued to work for LCCAD as a certified counselor and licensed social worker. Eventually Schriner left LCCAD for private practice as a licensed social worker. In 1992 he stopped seeing clients to work on a totally new project: travelling the country to solve the mystery of the covert group controlling the country, which he believes President Kennedy to have discovered and warned the American people about it 1961. The journey would result in Schriner’s own personal Satanic Panic.

What separates Schriner from the other conspiracy therapists in this section is that his contribution is not treating patients or training practitioners. Nor are the books resulting from this search (Breaking The Circle of Satanic Ritual Abuse and Cover Up of the Century) academic resources. Instead they are ritual abuse and repressed memory theories from a myriad of sources packaged as investigative journalism for mass consumption by the general public. This is not surprising considering Schriner’s background, and his books feature the sensationalized and hyperbolic style of this kind of writing. The bulk of these books are quotations and summaries from work by therapists and quotations from their patients. His sources include some familiar conspiracy therapists such as Bennett Braun, Pamela Hudson, Richard Kluft, Lawrence Pazder, Judith Spencer, Bessel van der Kolk, Colin Ross, Randy Noblitt, among others. He molds their work into a cohesive narrative with florid descriptions of sexual violence, firsthand accounts of horrific crimes, widespread clandestine organizations, and an easily accessible presentation under a sexy book title.

The first of these books, Breaking the Circle of Satanic Ritual Abuse reads equal parts self-help and therapists' guide. It is a mix of theory peppered with stories of his own practice. While Schriner admittedly saw clients he thought were victims of SRA, by his own account his attempts to convince the patients of this seems to have had little success.1 Schriner’s interest in the subject is not purely professional. He himself claims in the book to have been a victim of SRA.2 Among his resources is a book titled Out of Hell Again by Joe S. It seems reasonable to assume that this another pseudonym of Schriner’s and this book – currently out of print- is his personal account. He recommends this book along with Lawrence Pazder’s "Michelle Remembers."3 Add in Schriner's legitimate work in substance abuse, codependency, and heading effective 12 Step Programs, and the book takes on a sheen of credibility.4

Cover Up of the Century: Satanic Ritual Crime and World Conspiracy is a rapid-fire compilation of articles, books, court cases, criminal records, and interviews with anyone he could find who had ever even mentioned Satanic Ritual Abuse. Schriner has presented all this in hopes the reader comes to the same conclusion he did; the end, is in fact, nigh. Over the course of the book, what he thought was cults threatening ex-members, became cults using sophisticated mind control, which became sophisticated mind control with the help of the CIA, which became sophisticated mind control programs from the CIA, Russians, and a small group of Illuminati inside of the Free Masons. When he set this alongside the Christian bible’s apocalyptic book of Revelation, he finally concludes that humanity is doomed to a dystopian nightmare full of human-demon hybrids, Manchurian candidates, and “Robot” alternative personalities, finally culminating in the destruction of all mankind. He does believe that there is hope; found in spreading this knowledge, turning off our televisions, consume fewer violent movies, video games, and news clips, spending more time with our families, and praying to the God of the Christian bible.5 Schriner believes he has done his homework, and mapped every road sign on the way to the end times from the Chernobyl disaster to the assassination of President Kennedy, like some kind of modern midwestern Nostradamus.

After traveling, interviewing, and writing, Schriner returned to Ohio and gave up both his counselling and journalism careers in favor of running several campaigns for president (2000, 2004, 2008, 2012, 2016, 2020) and painting houses when he is not on the campaign trail. Shriner the presidential candidate distances himself from his previous work, but his pseudonym Daniel Ryder is buried on his campaign website. Any mention of his own experience as a Satanic Ritual Abuse survivor or his other possible pseudonym Joe S. are absent.

From Breaking the Cycle of Satanic Abuse: Recognizing and Recovering from the Hidden Trauma (Compcare Pubns 1992):

My wife and I encountered a “real life” version of the fictional town Frank Peretti wrote about in his bestselling Christian book: This Present Darkness." The plot line revolves around the phenomenon of spiritual warfare.  And the contention is, based on Biblical writing that the “darker” a town becomes spiritually, the more this opens the door for yet more demonic influence.  And why this book is so important is that it wouldn’t take a moral theologian to see how spiritually “dark” our country is becoming at this point.  And our book provides a tried “game plan,” if you will, for how to start to take our towns, and our country, back for God.

5. In an update to this book, he states that he had missed some important information while writing the first edition and that god was not going to end the world after all, just “chastise” it a bit. Ibid., pg 210↩