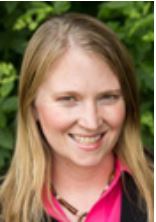 Why she is on our radar

Tara Tulley was a licensed clinical social worker and midwife located in Arizona and member of the International Society for the Study of Trauma and Dissociation (ISSTD) who claims to be a survivor of Satanic ritual abuse, with Satanic symbols burned onto her uterus. As a result of a complaint filed by Grey Faction, Tulley's licensing board revoked her license. In addition, she was terminated from her position as interim clinical director for the Tohono O’odham Nation’s Department of Health and Human Services Division of Behavioral Health.

Tulley was a licensed clinical social worker in Utah until her application for renewal was denied in October 2020. She obtained a license in Arizona in August 2019. The reasons for the denial in Utah, according to documents obtained from the social work board (p. 35), include egregious unethical behavior such as performing exorcisms on patients diagnosed with Dissociative Identity Disorder (DID), waving around a gun during a therapy session, and engaging in dual relationships with patients. In fact, other documents reveal Tulley was the subject of three complaints in early 2019 -- including one from what appears to be her supervisor -- which allege Tulley was in the business of “revoking masonic and druid curses,” routinely violated client confidentiality, smoked cannabis with clients before sessions, and invited deliverance pastors to attend therapy with clients. Tulley’s mistreatment of patients was so severe, according to the social work board’s license renewal denial letter, that one patient stabbed themselves in the throat. In an ISSTD forum thread, Tulley attempts to explain that she did nothing wrong. 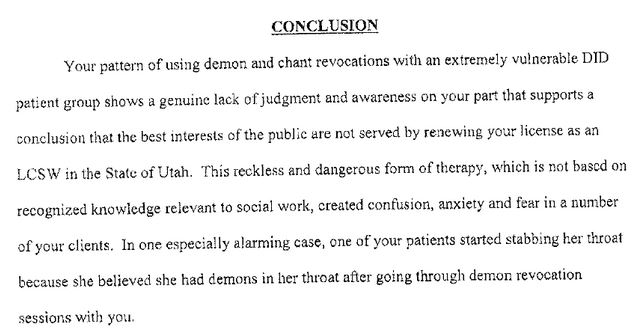 Tulley appealed the Utah board's denial and had the decision overturned due to the board not providing adequate time for Tulley to respond to the allegations; her Utah licensure status is now "expired" rather than "denied."

Tulley promotes the conspiracy theory of Satanic ritual abuse and mind control. In particular, she believes the Mormon church has been infiltrated by cultists who pervert Mormon symbology for use in their own, often Satanic, rituals. In fact, she claims there are entire families who subject their children to extreme abuse in order to install mind control programming and force them into sex trafficking and child pornography. She asserts that this abuse is multigenerational -- the abused children grow up, have children, and then subject them to the same ritualistic torture they went through. And in a claim that echoes Alison Miller, Tulley states that cult perpetrators will sometimes dress as aliens so that any recovered memories of abuse will sound like alien abductions -- and will therefore be dismissed. To her credit, she readily acknowledges there is no evidence for any of this.

Tulley’s own account of surviving ritual abuse follows this narrative -- in fact, it appears that her survivor story becomes that of her clients. The screenshots below are excerpts from a since-deleted blog post on a ritual abuse blog.

These claims are remarkably similar to that of a “Tara” whose account of abuse was reproduced in this blog post in 2018. The claims focus on her grandfather, an active member of the Mormon church who allegedly sexually abused boys beginning before she was born, and include being sex trafficked and drugged, as well as forced to commit murder and cannibalism. And, for good measure, a therapist who was part of the cult and also subjected her to these horrors.

“I believe my abuse probably started a week after my birth. He started training me to perform sexual acts on men from as early as I can remember, and probably earlier than I could remember. It turned out that my grandfather was training me because he worked with an organized group of men who were trafficking children for sex, and producing child pornography including snuff films, which I was a part of.”

“The only way a child can survive such horror, is to split or dissociate from the experience. For those of us with complex trauma of this kind, we survive by compartmentalizing this abuse so that we can survive, and for many years may have only fragments or complete amnesia until we become older and are safe enough to heal. Most of my childhood memories were not existent or fragmented in my conscious awareness for many years, but the pain and flashbacks that were confusing lead to self-destructive behavior when I was older.

“This kind of abuse happened through my whole childhood and included group rapes, group ritualistic torture and making of snuff films, and included at least on child being killed, in which I was forced to participate and then partake in forms of cannabalism that were are for the purpose of producing these films and selling them on a dark black market.”

“When I was 15 I did start having a lot of flashbacks that made me feel crazy, I attempted suicide a few times, and developed a severe eating disorder. Because I started talking I was shut up by being taken to a therapist who was a part of this group, and for 16 months he drugged me, hypnotized me, raped me, and trafficked me by prostituting me from his office and producing pornography, three days per week, for 4-6 hours at a time, and used various methods of mind control to mess up my sense of reality and what was real. By the end, at the age of 17, he convinced me to leave my home to go live with his daughter in an apartment in a small, isolated college town away from anyone I knew. It ended up being a set up, and I was used the whole time, drugged, and raped by multiple men for a period of 4 months. Oh, and yes, there was a bishopric member of the local singles ward who was trafficking me.”

In podcasts, Tulley claims that the “LDS church is a very easy system for perpetrators to infiltrate.” She also asserts that some founders of the False Memory Syndrome Foundation had connections to “perpetrator groups” and that the FMSF and others who spoke out about memories recovered during therapy were funded by “known perpetrator groups” who operate in an “underground financial market promoting child pornography.” She compares going after the perpetrators of cult ritual abuse and mind control to trying to take down a drug cartel. In response to the fact that all cases of alleged ritual abuse within the Mormon church fell apart upon investigation, Tulley and the host denounce the justice system for failing to allow people to be convicted despite a complete lack of evidence.

Unsurprisingly for someone who promotes such bizarre claims, Tulley was 2019 chair of the ISSTD’s Ritual Abuse, Mind Control, and Organized Abuse (RAMCOA) Special Interest Group (now the Organized and Extreme Abuse Special Interest Group). Rather entertaining (given her prominence within the ISSTD) is Tulley’s statement that hypnosis is a form of mind control. One must wonder if Tulley has pieced together that her colleagues -- who utilize hypnosis to recover memories of Satanic ritual abuse and Illuminati mind control in their patients -- are practicing the very mind control experimentation she seeks to expose. She previously ran group therapy sessions for “RAMCOA clients” -- who comprise about 80% of her clientele -- until, apparently, the group turned against her.

Messages released from the ISSTD’s internal message board reveal the depths of Tulley’s questionable practices and conspiratorial beliefs.

Complaints about Tulley extend beyond social work. A blog dedicated to exposing what they call one of the worst birth centers in Utah has been writing about Tara Tulley since 2013. When this person sued the birth center, Better Birth of Utah, the defense brought in Tulley as an expert witness. Apparently, Tulley has a history of defending questionable midwives. According to the writer, Tulley “testified to the court that she believes I have borderline personality disorder, and therefore should not be believed” -- a position unbecoming of a social worker.

“I am a survivor and I had a hysterectomy at the age of 35. I just had some intuition that it needed to be done. It was the right decision because it helped reverse some autoimmune symptoms that were ruining my health. I asked the doctor to take a picture of uterus and there were three symbols burned onto the outside of my uterus that match a representation of Three Lucfarian diety (sic).” Source

“I don't believe that this kinds of mind control experimentation has stopped. Either government sponsored mind control experimentation has not stopped, or abuser-groups have taken the information and duplicated experiments and "improved" upon them. I have recently become aware of a mind-control/sex trafficking training compound here in my state, after I was contacted by a survivor who ran away on foot. The survivor reports that the alleged abuser who is running the compound claims to have worked for the CIA, that this training site to test what has not been done before, and the kind of programming we are dealing with is all of the same kinds of MKUltra and other government mind-control experiments that were done previously in the 1950s and 60s. The thing that is different about this case, is that we think this individual is actually running some kind of a test training program, to see if adults who have not been mind controlled as children can be mind controlled and if DID can be created in an adult victim.” Source

“I am not saying that SRA is the right term. I actually very much dislike that term because the cult therapist who shut down my own programming in the 1990s and programmed me to believe I was just a victim of bad therapy and false memories used the term SRA to shutdown programming as he was claiming to be a specialists in it. However, in my state it seems to be still the term everyone knows and continues to cling onto.” Source

“I have to admit that the best part [of group therapy play with littles] was when one of them was rolling out some thinking puddy into a long roll, and another said "it looks like a big peepee, you should chop it up!" And they started all chopping it into little "pee-pees" pretending they belonged to the men that have hurt them and they were talking about how they were embarrassing them all by making them all smaller and chopping them up. That was some therapeutic processing right there.” Source

“There are some witchcraft practices that claim to be able to do this on a spiritual level. I recently read a book called The Witchdoctor and The Man: City Under the Sea, totally not a scientific book, but it is written by a man who claims to have been raised to be a Witchdoctor and describes some of these things as demonic worship and energy. It talks about how some of these things happen from the cultural perspective of some of these groups in his cultural understanding and beliefs.” Source