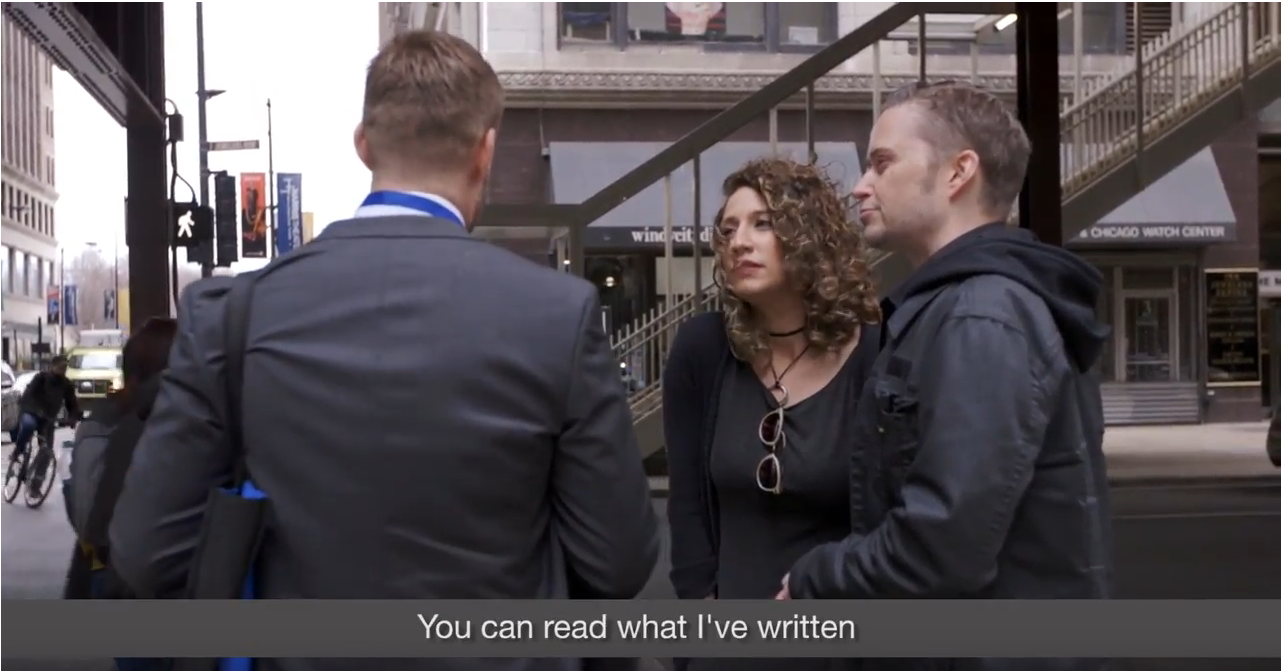 A couple weeks back, the International Society for the Study of Trauma and Dissociation’s (ISSTD) own Michael Salter went on a little rant about The Satanic Temple.

The scare quotes around Satanic Temple are amusing, as is his ability to squeeze multiple falsehoods into a mere 174 characters.

His tweet, the beginning of a thread seven deep, linked to a favorable review of Hail Satan? in The Guardian. The purpose of Salter’s thread is to convince readers that The Satanic Temple is comprised of “not good people” because of Grey Faction.

We typically don’t respond to disingenuous criticisms, but this opportunity was too poetic to pass up.

As he is wont to do, Salter mischaracterizes a position we have made crystal clear: Multiple Personality Disorder/Dissociative Identity Disorder (MPD/DID) is not “fake,” but typically iatrogenic, cultivated by unscrupulous mental health professionals. In some cases, this is done deliberately in order to confirm the conspiracy theories held by the therapist — often of long-debunked Satanic ritual abuse.

He also decries alleged harassment, but provides not a single example. Most likely he is referring here to our attempt to engage him in a conversation outside the ISSTD’s annual conference in Chicago in 2018, at which time he refused to answer questions and while walking away proclaimed “I am an open book.”

He might also be referring to our filing of complaints against therapists such as Ellen Lacter, Neil Brick, Alison Miller, and Brian Moss, who promote Satanic Panic conspiracy theories.

The next tweet manages to convey four falsehoods, a new record for him:

By “stalking” he means we were outside of the conference shortly after filming our protest, and ran into him as he left the building. (Reporters beware: Salter believes approaching and attempting to speak with him about his beliefs on one occasion amounts to stalking.)

It’s a complete mystery where he got the notion that we took photos of him with a telescopic lense. We have no photos of him other than screencaps from the video embedded above.

TST was founded in 2013. There was no “Grey Faction” prior to TST, and we did not write anything about Salter prior to 2018, following the annual ISSTD conference in Chicago. Moreover, no one affiliated with what would become TST or Grey Faction wrote about Salter before that.

Ironically, he’s demonstrating the very feature of human psychology he so vociferously doubts: the fallibility of memory. (Or he remembers the events of those few minutes quite clearly and is choosing to spread falsehoods instead, but we prefer to presume good faith.)

Next Salter ramps up the melodrama by proclaiming that we “threatened” to destroy the ISSTD. He leaves out the fact that Destruction rituals have a long history in Satanism, that TST expressly denounces violence as part of the Seven Tenets, and that the ISSTD Destruction ritual took place online (see embedded playlist of all TST chapter Destruction ritual videos) and thus presented absolutely no physical threat to the ISSTD. Salter knows this; he just conveniently left these details out.

Again, we make no such claim that individuals with MPD/DID are “making up” their claims.

The idea that we feel such contempt for people suffering from symptoms of mental illness demonstrates Salter’s unwillingness to engage with the facts, preferring instead to portray us simply as bad actors.

But this is Salter’s modus operandi. He has long claimed — and he’s not the first to do so — that the reason people decry “Satanic Panic” is because we just don’t want to accept the reality of child sexual abuse, that “false memory syndrome” is a meme propagated by pedophile apologists and anti-feminists who are seeking to justify or otherwise brush aside the testimony of women and children. In short, it’s the patriarchy.

There are several problems with this, one of which is the fact that the Satanic Panic is fundamentally misogynist.

Instead of considering such matters, Salter prefers to defame and slander those who disagree with him, portraying his detractors as malicious merely for the sake of intellectual convenience. Worse, he habitually paints Grey Faction as a campaign that seeks to harm those who provide help to the people who need it most. In reality, we seek justice and evidence-based mental health care, in place of conspiracy theories and pseudoscience.

It’s a shame that Salter feels an apparent need to involve himself in the cottage industry of dissociative disorders. He’s a criminologist, not a therapist.

And in fact, Salter has engaged in what appears to be important work.

For example, Salter has delivered presentations, interviews, and lectures on violence against women and the sexual exploitation of women. He’s published papers on clerical abuse. In these, he makes no more than a passing mention, if any, of “dissociation” or “ritual abuse.”

So Salter is more than capable of finding himself plenty of meaningful and potentially impactful work to do without affiliating himself with the ISSTD and the most conspiratorial-minded within it, as he does. He has shown that he can be a criminologist without dabbling in conspiracy theories, yet he insists on doing so.

If the goal of his Twitter-tantrum was to “prove” to the world that TST and Grey Faction are bad actors seeking to harm victims of abuse and those who treat them, all the while failing to accept scientific facts, he failed spectacularly. In the course of this feeble attempt, Salter instead demonstrated what cognitive scientists have known for decades: false memories exist, and no one is immune.