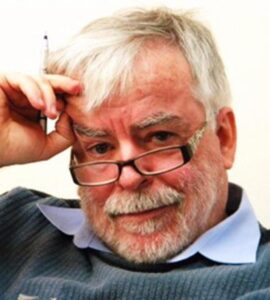 Writing in October 2019, Warwick Middleton reminisces  “When I recall my own early clinical experiences, I am reminded of how much the issue of ‘false memories’ was something that I wrestled with - particularly as I had witnessed from afar the sort of career-threatening scenarios that a number of U.S. therapists encountered. I was keen not to be subjected to a similar experience.” And thus far, Middleton has done fairly well in avoiding being subjected to that kind scrutiny, while still actively participating in and involving himself in the thick of conspiracy therapist culture.

For example, Middleton is the 2020 Chair of the Ritual Abuse, Mind Control, Organized Abuse Special Interest Group (RAMCOA SIG) of the notorious International Society for the Study of Trauma & Dissociation (ISSTD). The ISSTD describes the group thusly: “The Mission of the RAMCOA SIG is to further dialogue, knowledge, research, and training on the etiology, evaluation, and effective treatment of trauma and dissociation in clients reporting histories of ritual abuse or mind control.” For context, consider that recent chairpeople of this SIG include such prominent conspiracists as Valerie Sinason (2019); Michael Salter (2018); Alison Miller (2017), and Eileen Aveni (2016).

His webinars, lectures, books, and papers also feature prominent names on the conspiracy therapist circuit, often those with close connections to the RAMCOA SIG.

His written materials also demonstrate his close connections with other conspiracy therapists.

In an ISSTD newsletter titled ISSTD Spotlight on Australia, Middleton praises his fellow Australian conspiracist Michael Salter: “For example, one of these, Michael Salter, is exemplary Society member who plays a very active role on the Executive of the RAMCOA SIG, is a member of the Scientific Committee and continues to write and publish books on organized abuse. He is a candidate for election to the 2018 ISSTD Board. He was a presenter in the recent highly successful whole day webinar offered by our RAMCOA SIG”. Middleton has also published interviews in ISSTD newsletters of recognized conspiracy therapists such as Colin Ross, Richard Kluft, as well as a two part interview (1 2) of Nick Bryant, the writer of a conspiracy-themed book called The Franklin Scandal: A Story of Powerbrokers, Child Abuse & Betrayal.

In keeping with his cautious approach, Middleton is particularly careful about his terms of art. He has stated that he prefers the "simple term 'conditioning' to 'Mind Control" and is partial to the term "organised abuse." What exactly is organised abuse, you ask? The following is the description of a 2018 presentation he gave as part of the RAMCOA All-Day Webinar, as listed CE-credit.com:

Ongoing incest during adulthood almost invariably incorporates one or more forms of organised sexual and other abuse – whether it be multi-generational familial sexual abuse, the involvement of groups of workmates and others associated with the father, organised child and adult prostitution, or groups of abusers associated with churches or cults. Assessment of the victims of such abuse indicates that all have Dissociative Identity Disorder and that in general they are more dissociative than those with DID whose abuse has largely ended. The manipulation of such victims by their abusers often incorporates psychological conditioning and the direct and knowing accessing of alter states, which extends to the planned creation of compliant alters. The fine-grained study of this form of abuse informs us about many of the psychological processes (on the part of both abusers and victims) that underly organised abuse.

As of November of 2018, an article for Australian ABC news states that Middleton had personally identified almost 50 cases of DID. During an interview for the podcast System Speak, Middleton states “And when you get to the extreme ends of DID, one finds almost universally as I found in my published studies is that when you get ongoing incest into adulthood, almost invariably the abuse within the family extends to incorporate some form of organized abuse. Whether it be associated with the church, whether it be a fathers work mates, um, whether it be multi-generational family in orientation, or whether it be some form of a cult.” (36:24) Another interesting statement made by Middleton was during an earlier podcast interview for All In The Mind in which he says “The biggest institution in our society is the one that we don't have a Royal Commission about and that's the one called the family and it is in many cases closed and fairly hierarchical, and it's very, very hard for the average abuse survivor to speak out about what happened in the family, which is why various state laws that are in the process of being repealed represent a long overdue reform which in recent months, and in concert with a recommendation from the Royal Commission is being altered so that victims of child sexual abuse are not limited by a statute of limitation as to when they can take legal action.’

It should also be noted that The Cannan Institute (In which Middleton is on the board of directors and the medical advisory committee), located in Belmont Private Hospital, states on their website that several signs and symptoms could potentially mean someone has DID. Specifically,  “Feeling compelled to behave in a certain way” leads to the suggestion of mind control. On the same page, hypnosis is listed as a treatment and states  “may help to recover repressed memories, although this form of treatment for dissociative disorders is considered controversial” and discloses that they use psychiatric drugs such as barbiturates. Middleton was heavily involved with the launch of the Trauma and Dissociation unit at Belmont in 1996, the first unit in Australia to treat DID. Belmont Hospital also hosted and supported the launch of Blue Knot Foundation’s official practice guidelines for DID in October 2019.